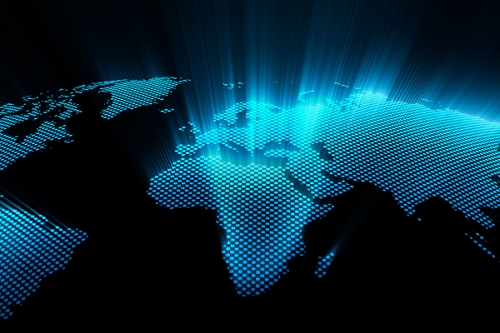 THE EVOLUTIONARY AND CIVILIZED HISTORY OF THE HUMAN BEING, in the simplest terms, can be seen as a progressive history where a marginal species climbed rapidly to the top of the ecological food chain by developing cognition, agriculture, industry, science and technology. At present, human beings are in a golden age of the so-called third industrial revolution.

And now faced with the dawn of a Fourth Industrial Revolution (4IR), a concept coined by Professor Klaus Schwab, Founder and Executive Chairman of the World Economic Forum (WEF). It involves ubiquitous, mobile, quantum computing. Intelligent robots. Self-driving cars. Neuro-technological brain enhancements. 3D printing, genetic engineering. The evidence of dramatic change is all around us and it’s happening at exponential speed.

Previous industrial revolutions liberated humankind from animal power, made mass production possible and brought digital capabilities to billions of people. While the first industrial revolution relied on water and steam, the second on electricity and the third on electronics and IT, Schwab sees the fourth industrial revolution as being shaped by the emerging digital technologies that will “fundamentally alter the way we live, work, and relate to one another”. It is characterized by a range of new technologies that are fusing the physical, digital and biological worlds, impacting all disciplines, economies and industries, and even challenging ideas about what it means to be human.

The concept is increasingly underpinning discussions about how to tackle the major challenges facing young Africans today, including unemployment and a lack of opportunity. The truth has finally dawned, that young people up to the age of 30 – face a gloomy future if the continent’s leaders do not up their game – about 60 % of Africans are under the age of 30, with a mean age of 18 years.

Africa is stuck in the second industrial revolution, with governments still prioritizing industrial programs and skills that will be disrupted, and even marginalized by current technology trends. The education is inadequate, because the new skills and competencies promised by the fourth industrial revolution are not yet being created in public schools in Africa, where millions of children don’t have classrooms or access to electricity, let alone computers. Instead, education tends to be content driven; with children feed information by teachers. The new world of artificial intelligence, which requires the cultivation of independent thought and self-learning skills at school level to prepare children for a world where life skills are critical, is conspicuous by its absence in Africa.

But all is not lost. The continent is awash with Millennials eager to engage with technology, and there are many companies, venture capital funds, international entrepreneurs and non-governmental organisations creating opportunities in ICT. Ironically, Africa’s underdevelopment provides a clean slate for technology and innovation. Energy is an example. With millions of Africans still far from a power grid, renewable energy and micro-grid innovations are reaching across the continent, changing people’s lives. The mobile revolution highlighted the enormous appetite for technology and entrepreneurship among Africans. This is also increasingly being shown in the banking sector. The UN says 12 % of adults in Africa have mobile bank accounts compared with 2 % globally.

Multinational companies are also coming to the party. For example, IBM has, with the UN, launched a $70m initiative to create jobs in Africa, focused on digital literacy. It aims at training 2.5m youths over five years. Technology hubs are driving innovation across the continent.

Take for instance Tech startup Andela’s ambitious goal to train distributed software teams from scratch using African talent with campuses in Nigeria, Kenya, Uganda, and Rwanda, before hiring them out to work on projects for international clients. Andela’s private sector model has attracted the backing and financial support of some of the US’s most prominent investment luminaries – with $100m series D fundraising concluded in January 2019. Andela.com co-founder and CEO Jeremy Johnson says that the software world is rapidly waking up to the vast untapped potential of Africa’s development talent. Johnson says that the firm has managed to unearth development talent in every African country to which it has expanded using rigorous hiring and training system. But he believes that the company is only beginning to scratch the surface of the demand for African distributed software teams. They are roughly at 1300 developers now (in 2019), and they expect that over the next five to 10 years the number to increase to 10,000.

There are however technological constraints including scarcity of high-speed broadband infrastructure. Internet connectivity in Africa was just 24.4% in 2018, according to the International Telecommunication Union, and persuading policymakers to prioritize the creation of viable tech ecosystems in which tech companies like Andela.com can thrive is a challenge. In 2022 3,200 nanosatellites are going to be launched by Amazon. These are the size of the palm of our hand. They will make massive contribution to communication, bringing the 40% of the globe that is not connected to the internet, networking the world.

Amongst the African leaders, Rwanda has jumped in head first, and Rwandan leader Paul Kagame understands this more than any other African leader by “future proofing” his country for the fourth industrial revolution. People 10 years from now are going to say why wasn’t everyone doing what Rwanda is doing? It’s a combination of how do you bring developers from across the country, how do you work to cultivate the talent – how do you train your promising young people to become developers and create pathways.

Policymakers, rather than stimulating entrepreneurship, are regulating it. A lack of enabling policy is a handbrake on progress. Governments tend to be complacent about technology, treating it as something on the margins of the economy rather than a transformational tool. Paul Kagame chairs the Smart Africa initiative, which aims to put ICT at the center of the continent’s national socio-economic development agenda. Kagame maintains the mindset is changing slowly but surely. And Smart Africa is the result of a realization among Africans that their future is, or should be, a digital one. The initiative aims to get political leaders to align their efforts and policies with this goal.

That said, Africa being Africa, this initiative must be exemplified by our own entrepreneurs. To exploit the benefits of digital technology to grow a unicorn (a $1 billion dollar market value company startup as determined by private or public investment). Though for now this conversation about the 4IR, may sound far-fetched, almost outwardly futuristic, seemingly out of Africa’s reach and capacity. But the Fourth Industrial Revolution is already here; it is already fundamentally altering the way we live, work, and relate to one another. The evidence of dramatic change is happening all around us and it’s happening at exponential speed. Why wait and play catch up. Let All Africa unite to accelerate The Digital Africa Initiative.